On the Road to Recovery-Never give Up! What can we learn from the Bill’s “Groundhogs Day” how many different ways can you lose a Superbowl 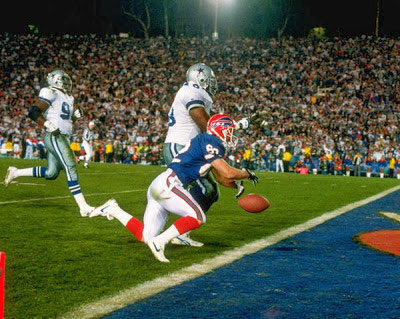 Many people may have forgotten Leon Lett’s stripped ball by Don Bebe at the goal line due to raw perseverance on the play in one of Bill’s Groundhogs Day how many different ways can you lose a Superbowl but it demonstrates an important life lesson. Never give up! At that point the game was a blowout and Bebe could have just shut it down when Lett was about to score after picking up a fumble. Instead Bebe hustled and chased him down. Here is the play: http://www.youtube.com/watch?v=NTeqQY_T2mE

I have some patients in my practice that simply give up on themselves. After an injury, I can give patients a game plan to help them rehab their injury like a coach but I can’t go out to their homes and workplaces and make them do it.

When I injured my ACL in knee a second time doing jumping drills in a sports conditioning class I saw the Redskins’s orthopedic surgeon. His answer was a surgical approach that would involve bone graft taken from my knee to fill in divots in my knee. I chose the consevative rout. I dedicated myself to getting the muscles around my knee as stong and flexible as they could be through strength yoga, condition and simply being active in sports year round. I also strengthened my core to take pressure of the joints. I got lucky avoiding the knife a second time but would not have had the chance had I not payed my dues in the gym.

I am now playing soccer and skiing hard but smart. I know I still have some instability in that knee. Over time our body can develop movement patterns in sports that compensate for the weakness. Some injuries are to severe for this approach but unless you are a pro athlete on a fat contract you usually have time to make a decision for surgery. Take personal responsibility for your recovery. Most of it is up to you. Oh- and don’t ever showboat at the big show unless that’s how you want to be defined. 20years later the two men Bebe and Lett have become friends. Leon Lett actually talks about the play as a life lesson when he does speaking engagements.