Inspirational Olympic Memory: Gary Hall, JR not Taking no for an Answer and Swimming in it his way 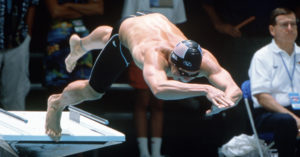 Memorial Day and pool season is coming up this weekend and here is one of my top 3 Summer Olympic memories, Share your with a reply and why it inspired you and if selected you will get a prize when a winner is selected later in June.

Diagnosed with type one diabetes in 1999 Gary Hall, JR was told by two doctors that he would never be able to compete at an Olympic level in swimming again. Devastated at first he turned and faced the strain to find other solutions. Like the Frank Sinatra song, he did it his way, training down in the Florida Keys at a camp called the race club and breaking up the monotony of the endless black lines in the swimming pool with spearfishing and land-based training including boxing inspired workouts. In the 2000 games, he was able to come up with gold in his signature event The 50 meter free. Not only did he win gold, but he did it in dramatic fashion tying his training partner and teammate Anthony Ervin in a dead heat.Overcoming the challenge of competition with diabetes made the victory that much sweeter for him. In sort where success is measured infractions of a second, he was able to exorcise the stigma of diabetes as a deal breaker to not only elite competition, but Olympic gold and in doing so became an ambassador for would be elite and every day athletes with diabetes.