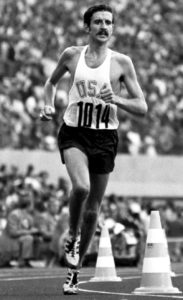 It’s 3 months to the Brazil Summer Olympics and each month at Arlington Foot and Anke we will be giving a prize for someones most inspirational Olympic Memory. In the summer of 1972 I was 7 years old my family had just moved to Delmar, NY from across the Hudson in Albany and the Munich Games provided an indelible 1st Olympic memory of horror with the tragedy of the Israeli athletes that were killed by the first wide scale terrorist act on a world stage. There was no way anyone could forget Jim MCCay providing the horrifying updates. To me Frank Shorter provided an inspirational memory as being the last American to win the Olympic Marathon but more importantly dealing with sorrow of epic proportions to not let the human spirit to come back from tragedy be deterred.

“I have faith in the human nature response,” Shorter said, years later. “Your immediate response cannot be fear, because fear is the major objective of the terrorist act. You simply decide, and make yourself not be fearful. If you can do that, it allows you to be more objective. And then, at least my thought process then goes on to, ‘OK, what can we do? What do we do?’ Then, as long as you feel that you’ve done all you can do, you just have to let go of any fear and see what happens. What happened then is, as we continued to process this over the next day, and then when they had the memorial service in the stadium the next night, on the way back from that memorial service, I think that’s when — at least for me — that feeling of no, no you can’t give in, because if you do, the terrorists win.

Each month before Brazil another inspirational moment will be posted and one will be selected from the reply posts on our Arlington Foot and Ankle Facebook page and a prize for the most inspiring memory will be given out. This month is an Addaday massage roller.