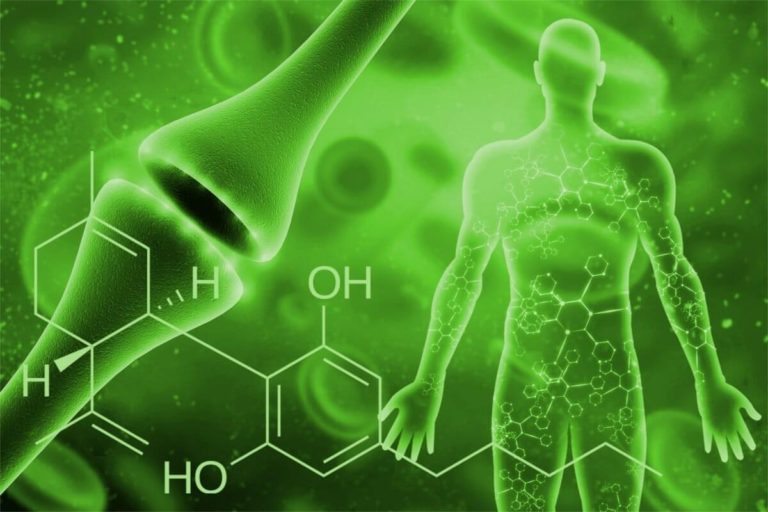 Although CBD promises a new treatment alternative for many afflictions, it is not a panacea. CBD is known to have applications in neurologic conditions like neuropathy and musculoskeletal conditions like multiple sclerosis and muscle spasms. The benefits of CBD include not being addictive while also being an economic option. The drug could potentially be harmful if consumed in conjunction with other drugs that interact with enzyme pathways throughout the body.

Least mentioned is CBD’s potential danger at high dosages, which has to do with the method of ingestion. It is useful to remember that CBD can be taken orally as tablets, sublinguals, topicals, or even by inhalation. Recent reports have highlighted the dangers of vaping CBD. Physicians note that the drug is absorbed into the bloodstream faster via sublinguals, followed by inhalation, tablets, and lastly, as a topical agent.

The reason that CBD is less potent when ingested has to do with its metabolism in the GI tract, which takes longer than other routes and has fewer unfavorable drug interactions. However, potency does not indicate purity, and the sublingual application excels in purity despite greater absorption and possible side-effects to be discussed. CBD is administered in many forms including shampoo, gummies, or even e-cigarettes, but all of these have lower purity as based on the chemical properties, which differ from one product to the next. At Arlington Foot & Ankle, we advise caution when purchasing the right CBD pharmaceutical to avoid any additional impurities, thus unexpected symptoms.

I. Components of CBD Action

Please note: If you are more interested in the drug profile, skip to section II, “the skinny-on” interactions.

To consider what side-reactions CBD can have with big pharma, one envisions what CBD does to cells at a molecular level. For this purpose, let’s look closer into the endocannabinoid system. This network is a peripheral component of our body’s nervous system, and can be thought of as a group of webs, in the form of neurons, that allows chemical information to flow between organs and tissues transitionally. The complex wiring involved is possible by receptor connections that exist throughout the body and natural intermediaries that invoke them, in this case endocannabinoids. Like normal neurotransmitters, these circulate in the bloodstream and send signals to create a firing response that cascades elsewhere to produce other messengers, toxins, or even proteins. With regards to CBD, there are two receptor proteins that bind to the drug differentially, known as CB1 and CB2. Here is a crystallography of what the receptors look like in a 3-D animal membrane bilayer: 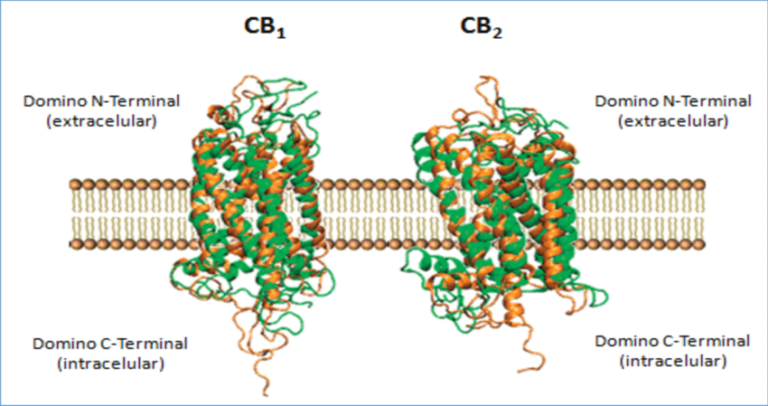 Figure A: Intra- and Extra-cellular imaging of CB1 and CB2 protein domains. Notice the width of CB2 is greater than CB1; this reiterates the “structure determines function” motif.

When discussing CBD, the primary target of study are the CB2 receptors, as they exist in millions of neurons throughout the human body. The two receptors depicted above are a specific class of proteins known as G-protein coupled receptors, abbreviated GPCR’s. What makes GPCR’s unique is that they always associate with a G-protein, which can be denoted as activatory or inhibitory. These G-proteins, in turn, alter other synthetic pathways that lead to a different protein or series of proteins, accumulating to impact the body by two means. Directly by inducing an organismal effect. Indirectly by entering the nuclei and altering the genetic code of the cell by way of a transcriptional modification or mutation. As cannabidiol comes in proximity with either CB1 or CB2, the molecule interacts with the receptors in a distinctive pattern; while other unrelated agonists have a preference for binding to CB1, CBD and its agonists bind specifically to CB2.

This is proven by the fact that when certain endocannabinoids bind to CB1, an inhibitory G-protein is turned on and peripheral nerves involved in somatosensation (touch) release different arrays of neurotransmitter. The mind then experiences almost immediate psychological effects that result in relaxation, lower attention-span, and uncoordinated limb movement. On the other hand, CBD’s affinity to CB2 has a separate lock-and-key mechanism that is coupled with an activatory G-protein, leading to a cascade that produces intermediaries that have distinctive physiological outcomes. This includes proteins beneficial to inflammation, chronic pain, anxiety, depression, sclerosis, and even certain cancers.

All of this clarifies one aspect regarding the endocannabinoid system, which is that it is the interplay of proteins produced by both CB1 and CB2 that oftentimes lead to mixed symptoms, both physical and psychological. In layman’s terms, it is the concentration in which these two receptors are both simultaneously active that produces the experienced symptoms, rather than the independent action of one active receptor over another. As this gradient can alter due to there being many drug agonists and antagonists, the fact of the matter is that every person will respond to CBD differently and will also have dissimilar side-effects when exposed to other medications. Among many to consider, negative symptoms from CBD overdose or drug-to-drug interaction include hypotension, diarrhea, nausea, vomiting, dizziness, and drowsiness.

CBD’s side-effect profile is divided among three categories: neuromuscular, gastrointestinal, and hemodynamic. The resulting cascades and the chemical products within these three have been established by the roles of the endocannabinoid system. The positive symptoms are mostly geared towards epilepsy, where a greater stability to neuronal firing rates that were greatly responsible for the seizures is responsible. However, one study finds that coupling CBD with anti-seizure medications, particularly Clobazam and Norclobazam, led to worse conditions. The other aspect to be discussed shortly is CBD’s major impact on blood-thinner and other key conditions.

In terms of Parkinson’s disease, however, other scientists found that CBD overdose made muscle movements and tremors worse, not better. Only those who had a more precise dose with consideration to other health conditions experienced beneficial symptoms long term. For those who have anxiety disorders or score high on severity indexes, CBD is definitely an option worth considering, but depending on the case a certain dosage should be prescribed by a physician. Otherwise, the research has found that CBD might not suffice as an effective or even long-term remedy, at least in these realms of neurology.

In addressing the two other categories, musculoskeletal and gastrointestinal, there is another method which elucidates the side-effects. It stems from one clinical study on piglets that spotted interactions with CBD on a distinct endothelial site; it was also from this work that CBD overdose had become associated with hypotension, as the piglets demonstrated increased arterial vasodilation by a significant percentage, suggesting that nutrients were being absorbed in the blood quite differently. Later research elaborates that all of this had been due to affecting a crucial set of enzymes that are responsible for nearly 75% of all the body’s metabolism, known as the Cytochrome P-450 enzymes, abbreviated CYP. The importance of CYP is that it contains several classes of mono-oxygenase enzymes that oxidize lipids, steroids, and carbohydrate derivatives; dysfunctional CYP, at a grander scale, results in less enzyme utilization and energy production, essentially hindering a cell’s ability to grow. Since these are crucial, let’s consider a visual in human mitochondria: 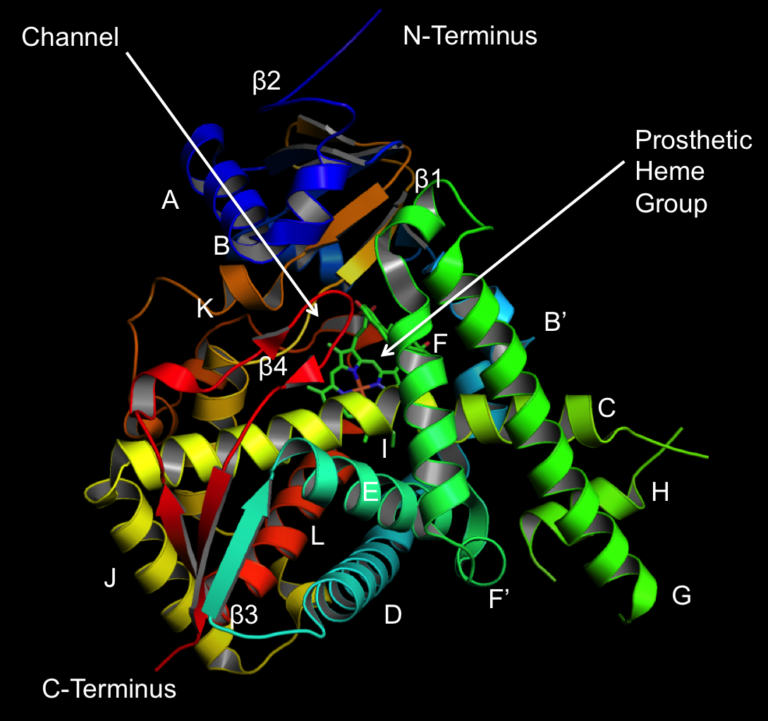 Figure B: CYP51, one example of the many enzymes constituting the human CYP class. The exact name of this enzyme is lanosterol 14-alpha-demethylase, responsible for removing methyl or -CH3 groups.

As these proteins are very sensitive to drugs, it is important to quantify how much CBD impacts the CYP class, and luckily the data exists online. The following ten CYP’s  have been reported in humans to operate less effectively due to CBD consumption:

Such does not answer one question though: what exactly is CBD doing to interfere with these CYP’s? The answer is straightforward: CBD is inhibiting them by preventing other chemicals from binding, preventing the outcomes of natural intermediaries. This might not sound deleterious, but it is because rather than allowing the CYP’s to metabolize whatever comes in their way, it is forced instead to become inactive. Further, as CYP’s are highly involved in lipid digestion, it is not surprising that one clinical group found that CBD absorption spiked greatly in a population that consumed the drug with a highly saturated-fat diet, leading to many commonly heard side-effects (diarrhea, nausea, etc.).

Several classes of drugs that are normally digested by these ten CYP’s are retained in the body longer. This intensifies their pharmacodynamics, or what the drug does to the body, making a normal dosage actually be considered a higher one. The psychopharmacology here becomes a mess, as these drug types have different withdrawal symptoms, so adding CBD to the equation leads to several outcomes. Fortunately, a few studies have attempted to isolate particular drugs in which negative CBD symptoms have been found. One study evaluated the disadvantage of using CBD with Warfarin and Ibuprofen, a blood-thinner and possible inducer of it. This demonstrates the potential to which it may be dangerous to couple CBD with other medications, as the study indicated that the CYP’s had clearly been impacted. Another brilliant group asserted that grapefruit juice, at overt consumption, affects CYP’s much the same way CBD does, and from that it was concluded that any medication which should not be taken with the juice should not be taken with CBD.

In summation, CBD can have side-effects but those which are harmful are either from direct overdose or unfavorable interactions with other pharmaceuticals. It is critical that we have evaluated CBD as a drug that will never be a panacea, but rather a temporary solution that more than oftentimes might be a better alternative to drugs that have more serious side-effects and addictive potential. We are pleased to announce the incorporation of CBD into our practice at Arlington Foot & Ankle. Please feel free to consult with expert podiatrist Dr. Ben Pearl on the topic of CBD usage as an alternative pain remedy. For consultation and purchase, contact our office at (703)-516-9408.